A Brave New and Improved World: 50 Years of Fighting For You.

In this presentation, Ralph takes listeners on his 50 year journey as a consumer advocate and insider and is able to create a big picture for the audience of how this country has changed and adapted over the years.

He then reveals trends that affected business then, and how these cyclical trends will affect you in the future, as new walkway safety standards are put in place and policies put into law. 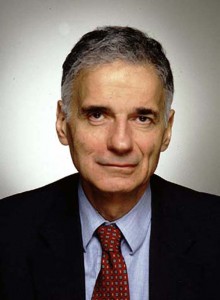 In 1965-66 he received the Nieman Fellows award and was named one of ten Outstanding Young Men of Year by the U.S. Junior Chamber of Commerce in 1967. Between 1967-1968, he returned to Princeton as a lecturer, and he continues to speak at colleges and universities across the United States.

In his career as consumer advocate he founded many organizations including the Center for Study of Responsive Law, the Public Interest Research Group (PIRG), the Center for Auto Safety, Public Citizen, Clean Water Action Project, the Disability Rights Center, the Pension Rights Center, and the Project for Corporate Responsibility and The Multinational Monitor (a monthly magazine).